Understand What You Love #2 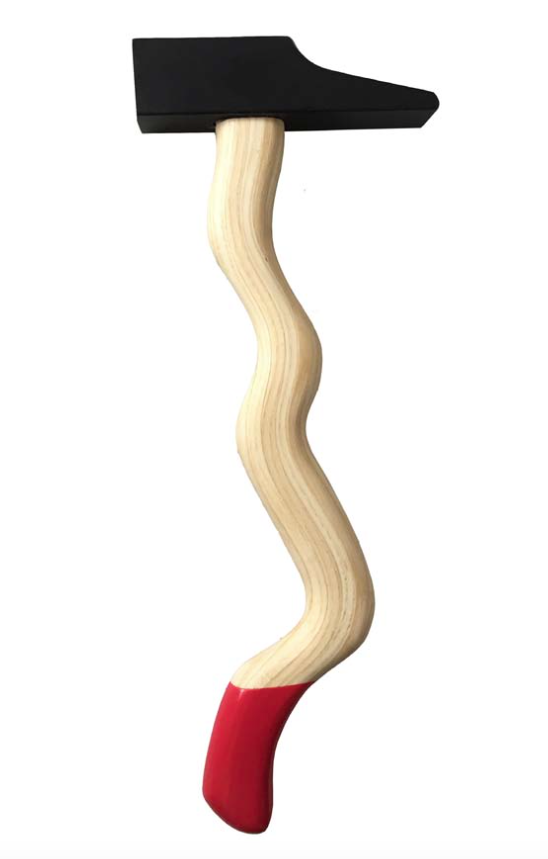 Each time we have collaborated with the designer Robert Stadler, he
had tried to explore the fine, moving, uncertain but very present line
between art and design.
Les Ardoises that we have produced in 2011, are as much Specific
Objects1 : monochrome, black and matte. But they become slates when the
collector uses chalk to draw or write on them.
Carole, produced in 2008, is a mirror fulfilling its reflecting function.
But another function, even more equivocal than the reflection, darker,
more nebulous and more poetic reveals itself with a specific hand
gesture, like a caress in front of the mirror: the luminous question
mark that appeared on the mirror like a riddle to solve, becomes then a
sentence. A proverb, a saying, an aphorism that transforms, by the time
of reading, Carole in Oracle.
Today, on the occasion of the exhibition L’usage des formes at Palais
de Tokyo, we have chosen to produce a new version of Understand What
You Love (hammers). The first release of 15 copies, made by metal and
polyurethane resin, not conducive to the use, was the head edition
Understand What You Love calendar that we had edited with Robert in
2006. This first version worked more as picture, as a knowing wink with
the collector whose only needed tool for hanging up his artwork, was a
hammer.
This new edition is radically different. Made of wood and steel, this
artwork is a real hammer. But the wave which hits it with humor, which
turns the handle in its very fiber, diverts its only function. The wave
that distorts the handle is immediately perceived as the trace, the result
of a clash of the mass of the hammer performing its function (driving a
nail). But by freezing, imposing its new shape to the handle, the wave
transforms the object’s function; it shows what we know but remains
invisible in the experience: the shock wave. The fact that the object
shows us that in the flow of the event we do not usually perceive, is not
enough to make this hammer a work of art. It is the paradoxical form of
this revelation crossing in both directions the border between design
and art: the undulation inherently flexible, fluid, result of the shock of
the function of the hammer and wood’s stiffness, firmness, hardness.
The invisible disrupts, deforms, thins the visible that is hard and rigid.
This is no longer the shock and the nail, that causes the invisible wave
(the shock wave), it’s the visible undulation of the tool that instantly
evokes the shock/nail; the object becomes subject of the experience.
Gilles Drouault.

1 Specific Objects is the term used by Donal Judd to describe his own work and the early years of Minimal Art. Donald Judd, Specific Objects, 1964. Arts Yearbook 8 (1965)