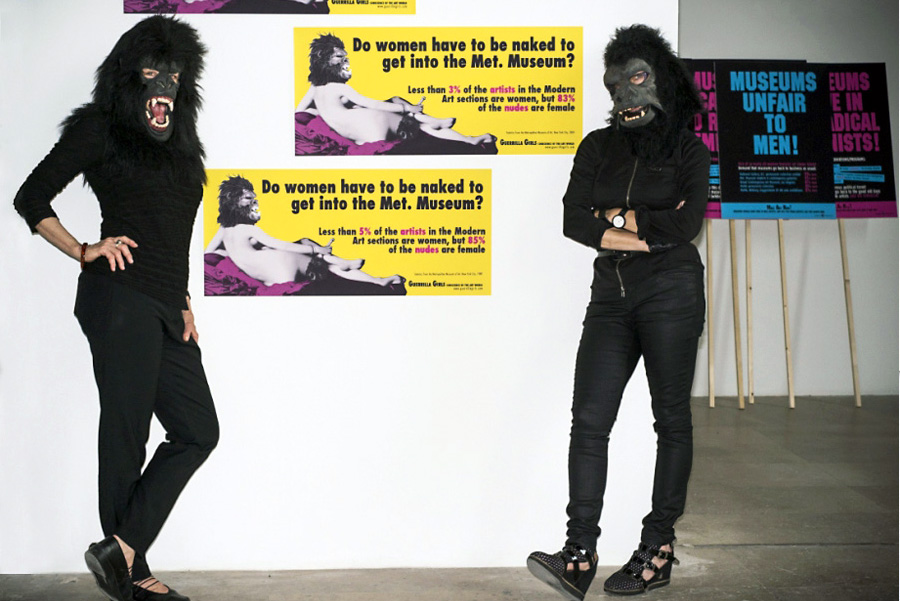 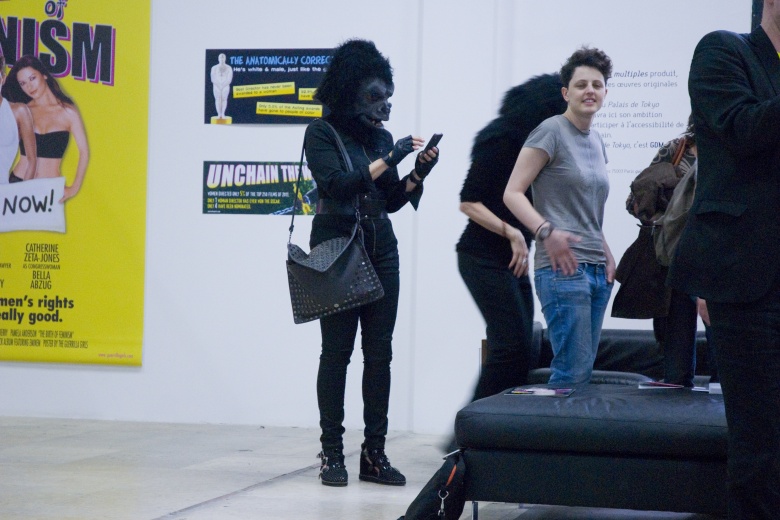 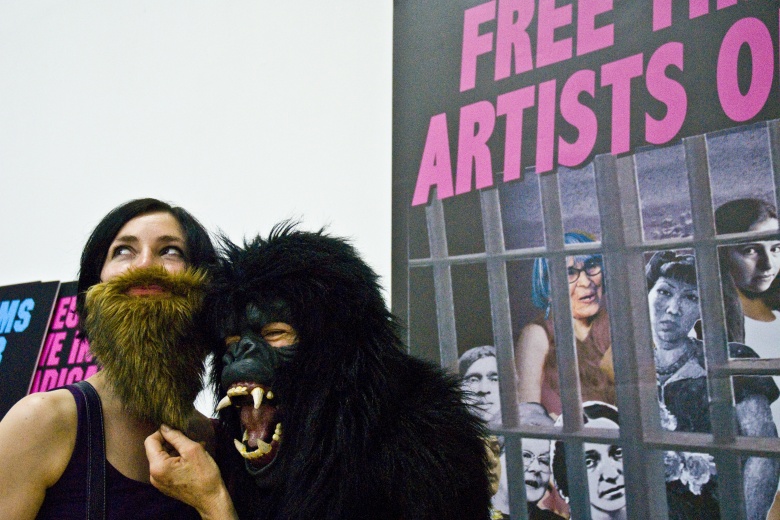 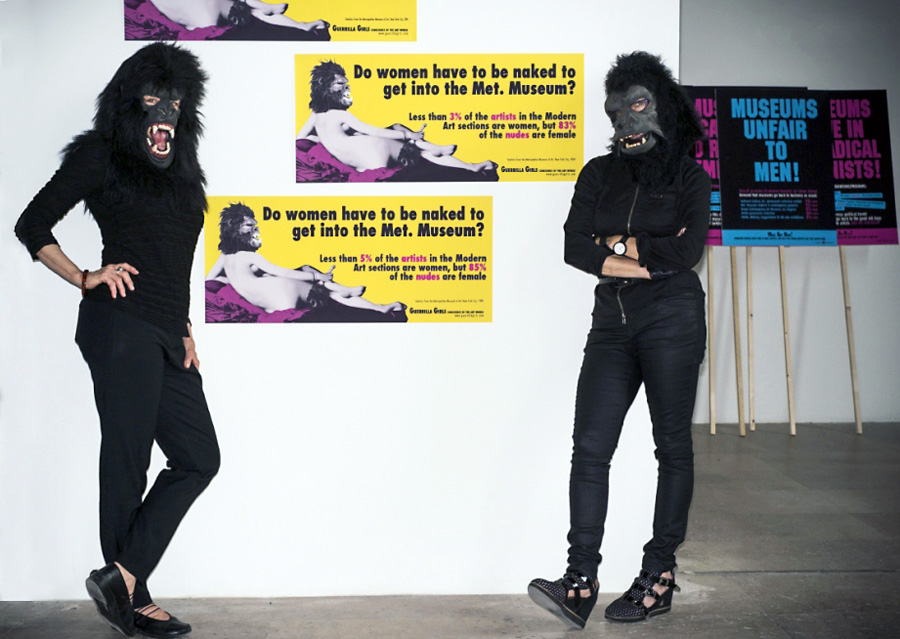 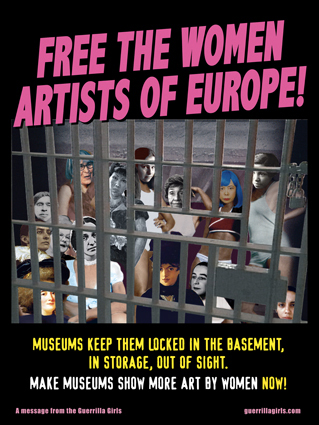 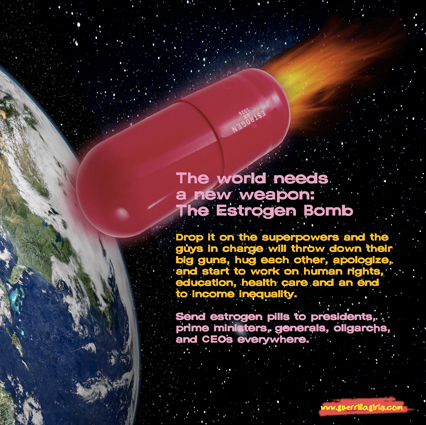 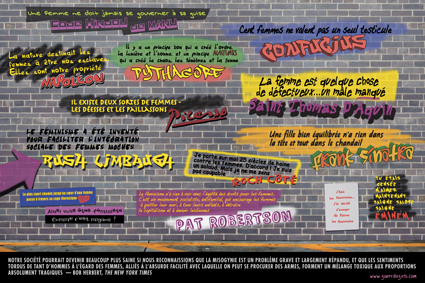 Exhibition till the August 31th

The Guerrilla Girls are feminist masked avengers in the tradition of anonymous do-gooders like Robin Hood, Wonder Woman and Batman. They use facts, humor and outrageous visuals to expose discrimination and corruption in politics, art, film, and pop culture. They undermine the idea of a mainstream narrative by revealing the understory, the subtext, the overlooked, and the downright unfair. They've unveiled anti-film industry billboards in Hollywood just in time for the Oscars, dissed the Museum of Modern Art, New York, at its own Feminist Futures Symposium, and created large scale projects for the Venice Biennale; the Centre Pompidou, Paris; Istanbul; Mexico City; Athens; Rotterdam; Bilbao; Sarajevo; Shanghai; Ireland; Krakow and Montreal. They are authors of stickers, billboards, posters, street projects, and several books including The Guerrilla Girls' Bedside Companion to the History of Western Art; Bitches, Bimbos and Ballbreakers: The Guerrilla Girls' Guide to Female Stereotypes; The Guerrilla Girls' Art Museum Activity Book; and The Guerrilla Girls' Hysterical Herstory of Hysteria and How it Was Cured, from Ancient times Until Now. Their work is passed around by their tireless supporters. They travel the world doing performances and workshops, encouraging thousands of people to invent their own crazy kind of activism, too. Just in the few years, they
have been in Australia, Brazil, Spain, Sweden, Finland, Switzerland, Poland, Ireland, France, and Canada, as well as all over the United States.

Recently, the Guerrilla Girls unveiled their latest project about art museums, "Time for Gender Reassignment",as part of an exhibition of recent work at Columbia College Chicago: "Not Ready to Make Nice: The Guerrilla Girls in the Art World and Beyond". They launched a new edition of The Guerrilla Girls' Art Museum Activity Book, a parody of the publications museums create to teach children to appreciate art (only ours teaches everyone to criticize museums.) Their posters and billboards about politics and marriage equality hit the streets of Minneapolis and Washington, DC right before the 2012 presidential election. Upcoming talks/performances and exhibitions include Feminist Boot Camp, New York; Celebration of 100 Years of Female Suffrage in Bergen, Norway; Meltdown Festival, London, directed by Yoko Ono; Gothenburg Biennial; and Alhóndiga Bilbao, Spain.